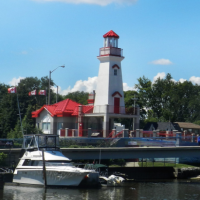 Our waterfront is more than a shoreline - it's a community. The City has been exploring opportunities on the Mississauga waterfront at 1 Port Street East, owned by Canada Lands Company, and 70 Mississauga Road South, owned by Imperial. The City has created plans blending the needs and interests of the community, the landowners and the City. There are unique opportunities at these waterfront sites to create vibrant, inspiring places where people will choose to be. We need to set the right priorities now for the future.

2016 Year-End Update - Imperial Lands at 70 Mississauga Road South On December 7, 2015, the Planning and Development Committee recommended approval of the Framework for 70 Mississauga Road South. This was endorsed by Council resolution on December 9, 2015. Imperial has also expressed their support for the Framework, in a December 4, 2015 letter to the Mayor and Members of Council. The Framework will guide the development of the Master Plan for the site to be completed by the purchaser.

In a statement released on February 17, 2016, Imperial announced three organizations who were invited to submit proposals for the purchase, remediation and redevelopment of the site. In a statement released on December 20, 2016, Imperial announced that they have signed an Agreement of Purchase and Sale with Port Credit West Village Partners Inc. The transaction is expected to close in late March 2017, following completion of due diligence.